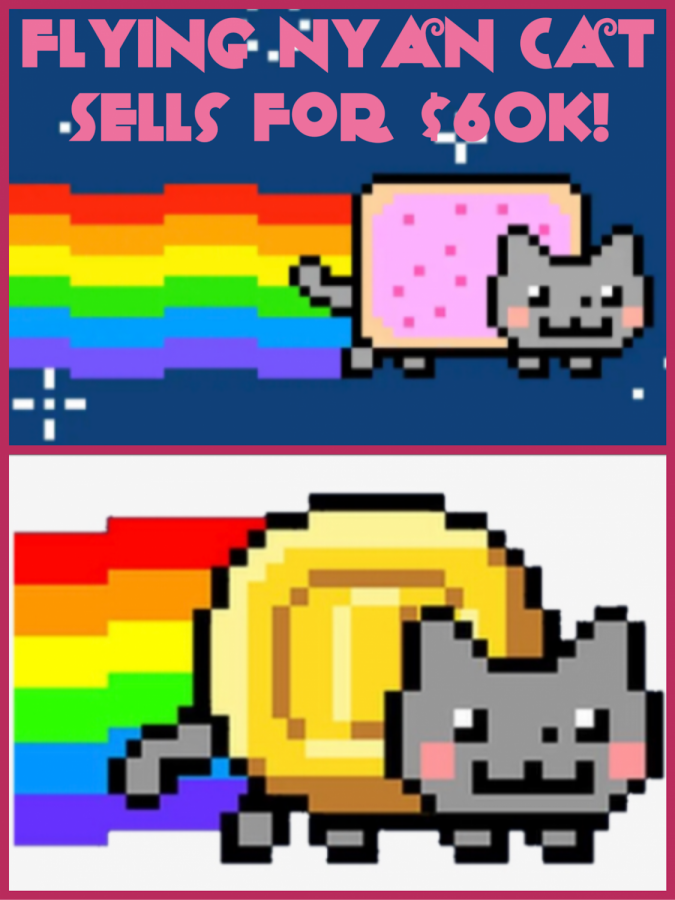 Last month Nyan Cat made history by being one of the first memes sold for $600,000 as an NFT. Images once used as gags online are now being treated as stock on the online market. NFT means Non Fungible Token, which is a virtual asset that cannot be duplicated through verification of a Blockchain. Some popular NFT’s are basketball highlights, digital art pieces, virtual pets, and  memes. An NFT is similar to a certificate of ownership which means you don’t have copyright but can resell it. This new concept of digital ownership was first introduced when Bitcoin joined the market. Bitcoins are proof of currency but unlike NFT’s, bitcoins are all identical. What makes NFT’s game-changing is virtual scarcity. This allows for these digital files to be exclusive.

Chris Torres created Nyan Cat in 2011 which has since become an iconic video game character. The design for Nyan Cat was inspired by the creator’s cat Marty, who had sadly passed away in 2012. The Nyan Cat gif was sold on the NFT marketplace foundation for the 10th anniversary of Nyan Cat. The foundation was launched two weeks prior to the sale and now is a thriving marketplace for many artists. The Nyan Cat gif was sold for 300 ETH and was bought by an anonymous buyer. ETH is the currency of the Ethereum Company, which is the second-largest digital currency company in the world. Since the sale, Torres has released two more Nyan Cat-themed NFT’s. One ironically being a Nyan Cat DogeCoin despite being sold using Ether, and the other is currently still up for bid.

The NFT market is currently valued at $250 million dollars and continues to grow at a rapid pace every day. Beeple is a graphic designer who was the first artist to sell an NFT through the British auction house Christies. His NFT sold for $69 million dollars, making him the third most expensive artist in the world. Even Banksy got in on the action by burning a $95,000 piece and turning it into $40,000 NFT.

The future of NFT’s are unknown, but some concerns surrounding environmentally alarming aspects of their production continue to grow. Bitcoin mining is the process of completing blocks to verify transactions on Bitcoin, miners are then rewarded with bitcoins. As a consequence, Bitcoin mining uses huge amounts of computing power which takes up 121.36 terawatt-hours (TWh) a year. Mining produces 37 million metric tons of carbon emissions each year, the equivalent of New Zealand’s carbon emissions for the same time period. NFT’s are sold using digital currency. As a result, the boom in the NFT market could have a devastating impact on the environment. Memes such as Nyan Cat could quite possibly ruin the world for a few bucks.